After ‘dining,’ using the term loosely, at our normal go-to Dauphin Island eatery (JT’s Sunset Grill), we visited Shell Mound and Cadillac Square. There were essentially NO birds present! However, although we only saw three birds, one of the three was a lifter for both of us: a gray kingbird (right)! It is rare in this area, and we were extremely fortunate to see it. . .thanks to other friendly birders! We visited our favorite island haunts (all very close to one another): Shell Mound, Cadillac Park, the local cemetery, Audubon Sanctuary, and Goat Trees, where we saw some familiar birds such as cowbirds, cardinals, blue jays, mourning doves, red-wing blackbirds, grackles, mockingbirds, and red-bellied woodpeckers. The only birds of any interest were half a dozen indigo buntings (lovely) and one each orchard oriole, kingfisher, yellow rump warbler, and brown thrasher. We lounged around our room until almost noon this morning before returning to poor birding on Dauphin Island. This was a gorgeous day, however, with temps in the sixties and a delightful breeze that even made being in the sunshine pleasant. We enjoyed ourselves. Today we birded first and last at the Audubon Bird Sanctuary, where we chatted with a few friendly birders and saw some birds. . .maybe half a dozen. . .we could not identify because they would not sit still in sunlight for us!

We did recognize a couple of black and white warblers, which we particularly like, a Swainson’s (right) and a gray- cheeked (left) thrush, a red-breasted nuthatch, ruby-crowned kinglets, an osprey, red-bellied woodpeckers, mockingbirds, one great blue heron, and several great egrets. Though we did not see a Carolina wren this week, we have heard their melodious songs daily. We love to bird on Dauphin Island. Acquired since 1992 by the Friends of Dauphin Island Bird Sanctuaries, approximately ten acres of crucial bird habitat on the island and the adjacent coastal communities have been permanently protected. We are grateful. Though the birding was disappointing, the weather was beautiful, all the people with whom we chatted were friendly and pleasant, and our company (each other) was delightful! We enjoyed the day, especially the scads of Michiganders who have escaped winter to bask in Southern sunshine. . .we do love to hear Northerners appreciate the South! Before going to JT’s for dinner, we wanted to attempt to locate the old Sand Island Lighthouse Keith learned of in a book he read on local sites of interest. We have driven the island tip to tip and had not seen a lighthouse, so we undertook to make certain to see it if it still exists. . .and we did. It is actually quite some distance from the island. The original Sand Island Lighthouse was located on a narrow strip of land between Mobile Point on the east and Dauphin Island on the west. The first lighthouse at this location was built in 1837 on approximately 400 acres; due to extensive erosion, the tower now rests on a bed of huge rocks with essentially no land around it. A second lighthouse replaced the 1837 light in the late 1850s. Confederate soldiers destroyed this lighthouse because it served as a Union lookout. After the Civil War, a classical brick tower was built on a foundation of 171 pilings overlaid with twelve feet of cement. This tower was constructed 670 feet northwest of the previous site and activated September 1, 1873. It stands at the southernmost point of the state of Alabama, near Dauphin Island, at the mouth of Mobile Bay. Erosion continued to plague the site, and by 1888 only ten feet of sand separated the lighthouse from the sea. It was at this time that large chunks of granite were placed around the base, where they remain today.

Tragically, the lighthouse keepers and their wives were twice swept away by storms, in 1906 and again in 1919. In 1921 the light was automated, but then deactivated in 1932. Today the lighthouse is owned by the people of Dauphin Island, who continue to raise funds to restore the structure.

After satisfying ourselves about the light, we returned to the Pelican Pub, which is located above JT’s Sunset Grill. The grill serves food, and the pub serves wine, beer, and spirits. So, we stopped by the grill to place our order, then went upstairs to the pub to order wine and await delivery of our dinner. This was a truly memorable day! Birding was disappointing again, though we did both acquire a ‘lifer,’ a worm-eating warbler (left). ..and we were able to ID it ourselves, though we appreciated confirmation from a local birder.

The ‘treat’ that made today so remarkable was visiting Bellingrath Gardens west of Mobile. The gardens were the life dream of Bessie Bellingrath, and she worked tirelessly to bring her dream to fruition. Unfortunately, she died unexpectedly before fulfilling all her plans, but her husband, Walter Bellingrath, dedicated his remaining twelve years to fully developing the property. His charge to the foundation he created to oversee the gardens and the couple’s home was to maintain the property “as a fitting and permanent memorial to my wife.” Bellingrath’s path to business success began humbly, as a railroad station master and telegraph operator. His career took a drastic turn in 1903 when at age 34 he and his brother William bought south Alabama’s first Coca-Cola bottling franchise. 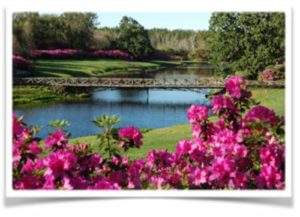 Walter chose Mobile “because he liked to fish,” and his brother selected Montgomery as his home base. Initially Walter Bellingrath ran his entire business single-handed. Daily he drove his truck to his customers’ places of business, picked up their empty Coke bottles, returned to his bottling plant to sterilize and refill them, then returned the filled bottles to his customers, all in the same day. As his business prospered and grew, he hired employees, of course. One was a stenographer, Bessie Morse, whom he married in 1906! He was 37, and she was 25.

A workaholic, Bellingrath was advised by his physician in 1917 to purchase the 25-acre fishing camp on Fowl River he had been “eying” and “learn to play.” That camp with its two rather primitive cabins became the nucleus of Bellingrath Gardens. Mrs. Bellingrath began planting flowers and shrubs to enhance the grounds. Ten years later (1927) the couple purchased an additional forty acres and hired noted Mobile architect George B. Rogers to convert the fishing camp into a country estate. The extensive gardens came first. During the spring of 1932, the Bellingraths placed an ad in the Mobile newspapers inviting locals to visit one Sunday afternoon to see the spring flowers. Forty-seven hundred accepted! So pleased were the generous couple with the interest, they opened the gardens to the public year round. This was prior to their permanent home’s being built there.

Again the Bellingraths employed George Rogers to design their home and oversee its construction. The result is a lovely fifteen-room home that truly looks (as intended) like an English country estate. More than the lovely design accomplishes this: The structure is built with hand-made bricks from 1852 (salvaged from the razing of an old hotel in Mobile); the balconies and galleries are adorned with cast iron railings and embellishments from another old building in Mobile; and the flagstones used in the terraces and walkways came to this country originally as ballast on English ships. The 10,500 square foot home was completed in 1935 and is open to the public. It is furnished with period furniture, porcelain, silver, and crystal collected by Mrs. Bellingrath over a period of more than thirty-five years.

Walter and Bessie Bellingrath were exceptionally generous to anyone they learned was in need, from the city of Mobile to individuals crippled by the Depression. Twice Mr. Bellingrath wrote a check to cover the local Chamber of Commerce’s deficits for the year. If Mrs. Bellingrath learned of someone in need, she would appear at their home insisting she just had to have an azalea or camellia or whatever she saw growing in the person’s yard, and write a large check for the plant. Her staff reported she frequently insisted they accept $20 bills for some ordinary task that was part of their usual duties.

Mr. Bellingrath said, “I want the world to be better and brighter by my being here.” No doubt it was. There should be more people like the Bellingraths and fewer people like most people! We toured the entire gardens, savoring and appreciating every blossom, shrub, tree, fountain, and feature. . .it is a gorgeous place, so very far superior to Callaway Gardens in Georgia or even our own Garvan Woodland Gardens in Hot Springs. And it is maintained immaculately!

There were many birds flitting among the tree and shrubs throughout the gardens. Because of the foliage, we could not see them clearly, and as they were not birds with which we are familiar, we could not identify their songs!