Tuskegee City Lake is a delight—a pleasant medium-sized lake located just off a major thoroughfare.Used by locals primarily as a picnic destination and for bank and small-boat fishing, you’ll find lots of swallows and flycatchers and some waterfowl and gulls in winter. There are waders year-round, but they’re most prevalent in summer and fall. Allow a few minutes to simply scan the entire site from near the (abandoned) HQ building, a couple of hours to take the lake loop and bird the site in earnest. 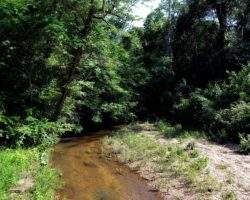 Tuskegee National Forest is the nation’s smallest in the national forest system. At 11,252 acres, it is small enough to survey in a day, yet large enough to contain a remarkable variety of habitats. Much of the land is in various stages of early to late second-growth forest, cut through with good roads and extensive trails. Look for scrub and grassland birds in the cutovers, riparian birds in the flood plains, and woodland species along the trails.