In Alabama during: Fall | Spring | Summer

DESCRIPTION:
Purple martins are a small, robin-sized bird about seven to eight inches high. They are members of the swallow family, a group of insect eating birds that catch their prey almost exclusively in flight. They are Alabama’s largest swallow and have long, pointed “swept-back” wings and a slightly forked tail. Adult males are a dark, glossy, steel-blue – which gives the species its common name. Females and immature males are duller on the back and pale gray on the underside. Their call is a flowing warble, and also a tee-tee-tee.

DISTRIBUTION:
Found in southeastern and central Canada, south throughout most of the continental United States, along the Pacific Coast, and south into Mexico. It is found statewide in Alabama during the spring and summer and is our state’s most widespread swallow.

HABITAT:
The purple martin is a bird of open woodlands, agricultural lands and residential areas, especially near water. They can be found in almost any open area, but local populations are influenced by the presence and abundance of suitable nesting cavities. They may often be seen perched in large groups on wires and rooftops.

LIFE HISTORY AND ECOLOGY:
The purple martin is a migratory bird and their annual arrival from the southern hemisphere heralds the beginning of spring. Highly social and gregarious birds, they tolerate and can even thrive in close association with humans. Southern Native Americans and early settlers established a custom of hanging hollow gourds in trees near their gardens to establish colonies of these birds. Contemporary martin lovers may erect large artificial houses, as well as “hollowed out” gourds to establish martin colonies. Natural cavities such as hollow trees and holes made by woodpeckers are used when available, though they usually do not form the large colony size seen in artificial nesting structures.

Nesting occurs in the spring when a mass of grass and other plant material is placed in a nesting cavity. Females lay and incubate 4-5 white eggs, but both sexes share in caring for young. Individual birds have a tendency to return to the same nesting structure year after year.

Large groups of pre-migratory roosts form during August and September and sometimes these roosts can number several hundred thousand birds. One particularly large roost of over 300,000 birds has been noted on several small islands below Wheeler Dam on the Tennessee River in Lawrence County, Alabama. This creates an impressive sight when thousands of birds fly into these small islands each evening in late summer between sunset and dusk. 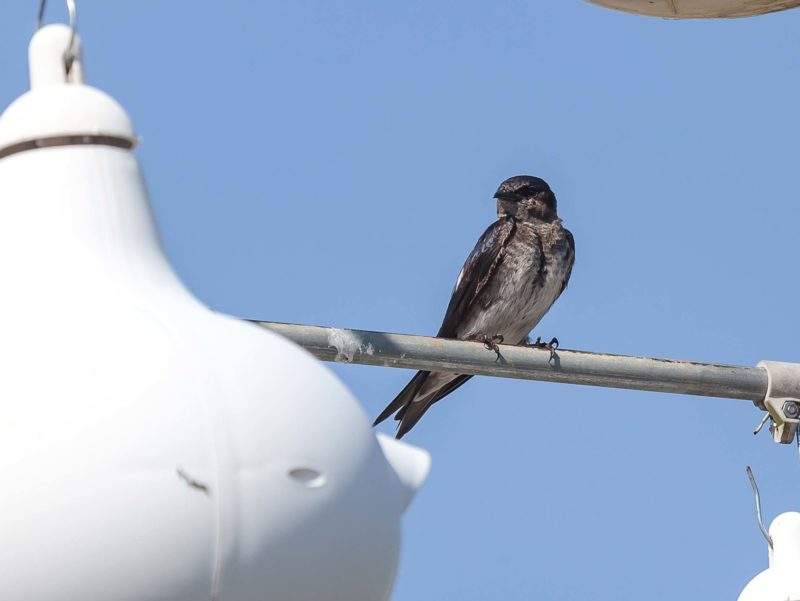