The Birmingham Botanical Gardens is a lush, 67-acre park that houses at least 25 separate garden installations, numerous water features, and a vast array of native plant life, much of which is of interest and benefit to birds. The BBG is potentially good for birds year-round, with the possible exception of the hottest part of the summer, when songbird activity is at a lull. The bird list for the gardens is long and impressive, boasting rare sightings of American Woodcocks, Chuck-will’s-widows, Red Crossbills, White-fronted Geese, White Pelicans, Peregrine Falcons, Henslow’s Sparrows, and more.

Yellow-bellied Sapsuckers are present from September through April. Both Brown-headed and White-breasted Nuthatches are common, with occasional visits from Red-breasted Nuthatches in the cooler months.  Eastern Phoebes are common and permanent here, and Eastern Wood Pewees and Great Crested Flycatchers also nest in the gardens. Any of the eastern Empidonax flycatchers may be seen in migration. Pine and Hooded are the most common warblers, but Common Yellowthroats and Black-and-whites are at least occasional breeders here. The park is surprisingly good for raptors, with Red-tailed, Red-shouldered, and Cooper’s hawks always nearby. Broad-winged Hawks are present in summer and Sharp-shinned Hawks from fall to spring. Barred Owls breed here, and Great Horned Owls patrol the area from the nearby zoo grounds and from the golf course to the east of the park. In short, almost anything apart from waterfowl, shorebirds, and birds of open agricultural lands may appear at the gardens on any given day.

As you enter the gardens from Lane Park Road, notice the pond to the left of the entrance road. There may be Green, Great Blue, and Yellow-crowned Night herons. Belted Kingfishers often hunt in the pond and roost in the trees adjacent to it, and this is a good spot to look for Red-headed Woodpeckers.

From the parking lot, enter the gardens through the main gate and take an immediate right turn. Follow this concrete path toward the wooded portion of the north end of the park. Note the glass conservatory and the open field to the right. Killdeer are often seen here, and the Crape Myrtles occasionally have birds foraging in them, from Ruby-throated Hummingbirds and Northern Parulas to Black-throated Green Warblers and even a rare Olive-sided Flycatcher. Check the skies in spring and fall for Common Nighthawks. Chimney Swifts and swallows (mostly Rough-winged and Barn) also fly the skies from March to September. Be sure to check out the small garden on the left just before entering the woods.  Most of the vireos, warblers, thrushes, tanagers, and orioles are can be found in the trees above and behind this gardens installation.

Enter the wooded area and cross a small bridge into the Bog Garden area. This is a very strong birding spot, especially good for Hummingbirds, Flycatchers (look for Empidonax flycatchers here in the fall), and Warblers. A small boardwalk extends over a portion of the bog. Spend some time at this spot, then walk to the left (west) and bird the loop trail around the second bog. Winter Wrens sometimes skulk here in the winter months.  After birding the bog, proceed east to pick up the paved Gardens Loop trail. The first garden to the right will be the Kaul Wildflower Garden, which is highlighted by a wooden gazebo. This installation boasts an impressive array of native species, many of which attract birds. Walk the open loop around the area, which is at its best in migration. A man-made stream in the west portion of this garden attracts many birds to bath and drink, especially during periods of dry weather.

Continue west on the paved Garden Loop trail and visit the Fern Glade. This most attractive, shady garden with its thick ground cover often hosts feeding flocks from fall to spring, and the head of the rushing man-made stream north of the Glade’s boardwalk is frequently packed with songbirds. From the Garden Loop trail, there is a fork that proceeds steeply uphill between the Wildflower Garden and the Fern Glade. Walk this trail to bird the seldom-visited highest portion of the park, a terrific migrant trap, and a good spot to survey many if not most of the park’s species. The loop passes above and behind the Fern Glade, eventually rejoining the paved Garden Loop trail via the Day Lily garden.

The next major garden of interest is the Garden for Southern Living. Most of the good birds here are found in the trees above and around the installation, and in the thick plantings to the sides and back of the garden. Leave this installation and follow the main path in the direction of the main gate, turning right to follow the trail through the Alabama Woodlands. The bird list for this area is quite extensive, including Prothontary Warblers,  Wood Ducks, Barred Owls, and more – but simply expect to encounter a good variety of interior forest breeding species and migrants here. As befits large stands of mature trees, the birds are not overly dense here, but the numbers pick up around the water feature along the southern portion of this segment of the gardens.

Beyond the Alabama Woodlands lie the Japanese Gardens. This extensive area is highlighted by a good-sized pond, and scattered small trees. A small occasional stream runs along the east side of this garden, and it meets a bamboo forest at the extreme southern end of the park. The mature trees on the periphery of this garden are often productive and good for birds – House Wrens, Great Horned Owls, and various migrants can sometimes be seen in the more formal portion of the Japanese Gardens. Look for Great Blue and Green Herons on the rocks around the pond.

The Birmingham Botanical Gardens merits a 3- to 4-hour visit almost any day of the year and should not be skipped. The educational component is also quite strong here. Use the labels and tags on the plants to learn the names of the species. As the great Tom Imhof said: “When the birds are slow, botanize!” In conjunction with a visit to the Birmingham Zoo next door, this provides an excellent opportunity to enjoy a good day of birding five minutes from downtown Birmingham, Alabama.

The parking lot and Garden Center, including the Library at Birmingham Botanical Gardens, are barrier-free facilities as required by the Americans with Disabilities Act (ADA). During operating hours of the Garden Center, complimentary wheelchairs are available to check out at the Receptionist's desk on a first-come, first-served basis.
Much of the site is currently not barrier-free and assistance will be necessary. Nevertheless, many paths and garden areas have hard surfaces throughout and offer numerous visiting opportunities. The Japanese Gardens area and the Alabama Woodlands paths are considerably less accessible and some paths that lead to the more remote sections of the Gardens are dirt, but the main paths are very accessible, paved paths that have a gentle slope.

Located at 2612 Lane Park Road, Birmingham AL 35223, the Birmingham Botanical Gardens (BBG) is situated in the area where Birmingham, Homewood, and Mountain Brook meet. From US 280 south of downtown Birmingham, take the Birmingham Zoo/Birmingham Botanical Gardens exit, which is Cahaba Road. Follow .2 mile, and at the traffic light for the 5-point intersection, take a slight left turn onto Lane Park Road. The entrance to the BBG is ahead on the left in .5 mile. There are restrooms, a gift shop, a restaurant, vending machines, and a lending library in the Education Building. Service stations, restaurants, lodging, and shopping are all available in the surrounding neighborhood. Aldridge Gardens is a 30-acre former private home,  5 acre lake, gardens, and grounds now owned by the city of Hoover that has been converted to use as a botanical garden. The best time for serious birding attention here is during migration. Located within the 200 wooded acres of Lane Park, the Birmingham Zoo is one of Alabama’s most-visited tourist locations, as well as being a surprisingly productive place for year-round birding. The best birding on the grounds exists outside the Zoo i … East Lake Park is one of the best places in the Birmingham area to see birds, because it has a variety of natural features that provide food, water and shelter for a wide range of species. Using water from Roebuck Springs and Village Creek, this 45-a … The Five Mile Creek Greenway, as it passes through the small historic community of Brookside, provides access to the banks Five Mile Creek for about 3 miles. The Greenway trail begins at the end of the Bensko Park parking lot and winds along via a wi … 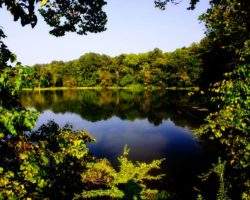 Lake Purdy is a 990-acre reservoir on the Little Cahaba River which provides drinking water for the City of Birmingham. Surrounded by protected woodlands, the lake and its environs have become one of those rare birding destinations that is always int … Moss Rock Preserve is a 349 acre nature preserve owned by the City of Hoover. The preserve includes gigantic boulders, waterfalls, rare plant glades and about 10 miles of trails.