Brierfield Ironworks Historical State Park is an attractive, open park with a friendly staff. Primarily open and level terrain has a small wet-weather stream and a covered bridge not far from the park entrance. Gently rolling hills are found toward the rear (north) end of the park. The forest is mostly mature  hardwoods, with scattered pines on the higher elevations. There are multiple “period” buildings dotting the landscape, and several rustic cabins and a group lodge on the north end of the park. The center of the park is dominated by parking areas and picnic pavilions.

The entrance road and the front (south) end of the park should be productive for migrants. The central, more open area is more the province of typical “suburban backyard” songbirds – Blue Jay, American Robins,  Brown Thrashers, etc. Canopy birds are found throughout the park (Red-eyed and Yellow-throated Vireos, Great Crested Flycatchers, Eastern Wood-Pewees, Orchard Orioles, and even Northern Parulas and Yellow-throated Warblers). Winter brings roving flocks of Cedar Waxwings, and mixed-species feeding flocks along with the resident  Carolina Chickadees, and Downy and Red-bellied Woodpeckers around the park.

The shrubs and small trees near the cabins and other park buildings host Brown Thrashers, Carolina Wrens, and Chipping Sparrows. The roadway edges produce White-eyed Vireos, Indigo Buntings, Blue Grosbeaks, and Eastern Kingbirds in the warmer months. In winter, Ruby-crowned Kinglets, White-throated and Song Sparrows, abound. In milder winters, perhaps Palm and a few Orange-crowned Warblers can be found.

All in all, Brierfield Ironworks Historical State Park is attractive and easy to reach and explore. Much of the birding can be accomplished on a point-to-point basis, where one drives from one part of the Park to another, surveying different habitats in order to see the greatest number of species in the least amount of time. There is a swimming pool and a playground for smaller children, and the store and picnic areas can provide a welcome respite.

This location offers some opportunities for access, with some gravel paths, wide dirt trails and good sight lines. The restrooms are not accessible, and there are large portions of the park that would be difficult or impossible to get to via wheelchair. The terrain is fairly level, and can be managed by someone using some assistive devices, however. The Oakmulgee Division of the Talladega National Forest contains the state’s largest population of Red-cockaded Woodpeckers. The birds nest and forage exclusively in stands of open, mature pines, where they are easiest to find early and late in the d … 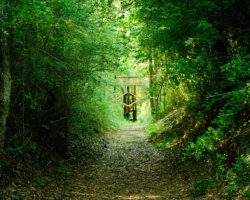